Charles Stewart
Amazingly he was chosen as a de facto winner and he can thank Lloyd Carr for identifying him as the beaten man on Michigan Replay. For those unaware, C-Stew was the man burned by Vandy's "trickeration" play as he saw a pass, albeit a backwards one, and thought that he immediately had to tackle the receiver. However, since the pass was backwards, Vandy took the opportunity to run a receiver right past C-Stew and into the end-zone for the easy touchdown and what turned out to be our only blemish. He was running neck and neck with Henne and the all-hands team for the first weekly edition of this year's Curry Awards, but a strong second half performance forced us to pick the defender who gave up the only points this week. Better luck against the Chippewas!!

Chad Henne (and a host of other Michigan QBs)
RANT WARNING
Picking a "winner" for week two seemed just as difficult as it was for week one. We must've really gotten under Rivas' skin this year because he's running dead-last in the balloting as he tries to prove us wrong and win the Groza. It almost pains me to say he's been the most reliable player on the team so far, but Hart is just slightly ahead of him in that race since he's a bigger component of the offense. Now, our offense hasn't been a juggernaut or anything - the point totals from the first two games are a bit misleading - and I know fellow Wolverine fans expect nothing less than perfection from their quarterbacks, but we generally expect a certain level of consistency. The only consistency Henne has seemed to show this month is that he wants to throw the ball as hard as he can. Now, he's not the worst QB Michigan has had to deal with (cough cough Navarre cough cough), but Henne almost seems to be in a negative progression. He needs to understand the meaning of the words touch and accuracy, because he needs to improve both if we expect to have a chance against the Fighting Irish. I was willing to write off the drops from week one, but Henne's hard throws played a big part then and with a marginal improvement against a MAC opponent like the Chippewas, Henne has more than earned this award. It also didn't hurt to see some other Wolverine QBs performance, or lack thereof, on Sunday. Now I'm not going to name names, but even Tom Brady, Mr. Playboy himself, was lucky to get a win with his 48.7% accuracy against Buffalo. Then again, look at the lineage in-between Brady and Henne over that weekend and it's nothing to brag about. Matt "Can't believe Henne beat me out" Gutierrez is now leading Idaho State over teams named Fort Lewis; John "I'd like to thank the Yanks" Navarre has all but fallen off the depth chart at Arizona since they have a two-time Super Bowl MVP in Kurt Warner and a two-time NCAA Champ (and '04 Heisman winner) Matt Leinart; Drew "I can't believe I got a deal with the Yanks" Henson can't even land a spot as the number three at Carolina behind Delhomme and Weinke; and before there was Brady, our own National Champion and Rose Bowl MVP Brian Griese can't even earn a snap with the Bears despite his huge paycheck; and if we go back one further we find that Todd Collins is still in the league backing up the forever young Mark Brunell (who helped rob us of the '91 National Championship - at least Grbac helped repay the favor the following year in the rematch at the Rose). Yes, y'all read that right, Todd Collins is still in the league and one fluke play from taking snaps. I guess Scott Dreisbach and Elvis Grbac have finally given up on the game, and I don't blame them given the recent accomplishments of our other quarterbacks since their time. Lastly, as a footnote, Jim Harbaugh is shockingly not on the radar of any pro teams this year. We started holding these events so that you can communicate with each other CallTouch. Now you will become much closer to each other

Morgan Trent
There really isn't much we could find to hate about the players in the Notre Dame game. A good part of us wanted to give this one to the coaches for a few lapses where we looked quite fallible (namely anytime ND went no-huddle), but the Curry Award is supposed to go to a player, so we went with the "marginal" weakest link of the week: Morgan Trent. Chad Henne looked like he may run away with the title early for a second-straight week when he threw our momentum right back to Weis and the boys, but he settled down well after that. Rivas also tossed his hat in the ring early with a missed PAT but he converted the rest of his chances and that missing point never came back to bite us. Now, as much as we like to hate on over-rated cornerbacks, it seemed Morgan was merely a victim of circumstance this week when the Committee made it's selection. For the most part, if you're a Michigan DB not named Leon Hall this year you will get picked on, and Morgan Trent certainly was. Now he wasn't as badly out of position as the Award's namesake usually was, so there is much less of a worry. And I will give Trent his due as he did pop on the loose ball that Oluigbo knocked out on the kickoff after our missed PAT. However, he was burned for two of the ND touchdowns, and on one he even took a penalty. The penalty was the play that basically sealed his fate, because in our opinion if you're going to take a penalty in the end-zone you better make sure the receiver doesn't catch it. That and it was very reminiscent of Marcus Curry. That said, it's nothing for him or the fans to be discouraged by. For the most part Trent was step for step with every receiver (and definitely not burned as bad as the Irish secondary) and the Irish have a great pair in Samardzija and McKnight. That said, the committee likes how the secondary is shaping up for the rest of the season as the only other teams that have a receiving corps (and good QB to go with them) to challenge them will be MSU and OSU. So, if our secondary wins anymore awards before those games, then we'll have more to worry about.

Turner Booth
This was the head-turner. We had to check the roster online to confirm who the long-snapper was, but it's the one and only Turner Booth. We all but manhandled the Badgers in this game, but they made it more of a field position game then some thought, so the award for this game goes to long-snapper Turner Booth. Why? Let's set the stage, less than two minutes to go in the first half, the Badgers take a timeout before their upcoming offensive third and long, and who do the cameras show? Michigan's sideline where Bachman Turner Overdrive is practicing for his snap to the punter - right in front of our offense no less - before the end of the half because he (along with Classic) was so confident our offense wasn't going to do anything and the Badgers still had their timeouts left.

Charles Stewart
AKA C-Stew. He gave up both the TDs in his hands-down best impression of the year of the Award's namesake - looks like he's trying to muscle his way onto the trophy's nameplate permanently.

Jeremy Van Alstyne/Willis Barringer
This end had all but fallen off the depth chart for good, then he got some time on the goal-line defense and his late help/penetration/what-have-you cost us one of the touchdowns while safety Barringer took a horrible path to a completed pass and gave up 40 yards of real estate leading to the second touchdown. The only dampers on an otherwise satisfying demolition of John L's troops.

Mario Manningham
We couldn't really just fault one guy for giving up the 60yd screen pass to Tony Hunt from the 3rd string QB because lots of guys missed tackles and it was the only brainfart they had for the day - the flag on the Morgan Trent interference should've been picked since he turned late and the receiver bumped into him and the ball was still 10 yards too long. (For playing with a cast the past two weeks Morgan Trent has played admirably and has us quite confident our corners are in good shape for OSU provided they stay healthy.) Therefore, we're giving this one to the traitorous knee for making this game closer than it needed to be. For once Classic had the team well prepared for a hostile road environment and the defense all but killed the Nittany Lion QBs. If we had a healthy Super Mario this game would've been a rout on the scoreboard as well.


A TRIBUTE TO MARKUS CURRY

Markus Curry is the only player in the history of the U-M program who managed to make himself look good by being beat so bad. His only saving grace was the fact that our defensive line forced the QB to underthrow the receiver so much that it made Curry look like an All-American. [Pictured below are some images we're all too familiar with from the Curry Era.] 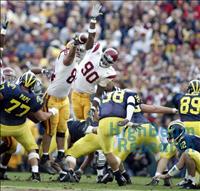 Congratulations to our 2005 Winner:
Garrett Rivas

The man who needs no introduction, nor does he deserve one. Pictured at left is an image that haunts us as much as it does Lloyd. All I can say is I can't wait for next year's recruit, Bryan Wright out of Salem, OH who has a 57-yard field goal to his credit - at least his kicks don't sound like they're bad enough that they could confuse a commentator into thinking it was blocked.

In related news, apparently Rivas has somehow made the Lou Groza watch list. Yes, you read that right, he's one of 30 kickers to watch for that could win the most prestigious award given to a college kicker. [see related article at mGoBlue.com]