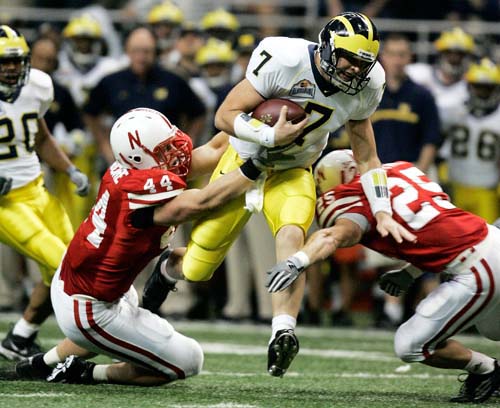 Chad Henne committed the most heinous crime a Michigan signal-caller can commit under the Lloyd Carr Era. And he did it right in the middle of the bowl game, of all places.

He scored a touchdown—without throwing the ball. (Audible gasp) That’s right!  A Wolverine QB moved the ball…into the end-zone…with his feet! My word, old chap. How uncivilized of you.

Watching the sophomore careening off defenders, refusing to slide while picking up multiple first downs, Michigan fans became confused.  “When did we recruit Michael Vick?” they asked, consulting the NCAA rule book to see if what Henne was doing was even allowed. Meanwhile, two Ohio State fans nearby became concerned, having never heard of an NCAA rule book before.

One had to wonder if this display by Henne would teach Coach Carr anything. After all, his quarterback had 13 rushing attempts for 38 yards! (And that’s including 4 sacks and a four-inch QB sneak.) Previously, Henne had not executed more than 6 rushing attempts in a game this season and his highest rushing total of 11 yards was nearly quadrupled at The Alamo.

>Oh, and he did have that one rushing touchdown. Bringing his season total to…let’s see, carry the five, subtract the root of 42…okay…one rushing touchdown. Well, at the very least Carr should get a good estimate on his play-book if he ever appears on PBS’ “Antique Road Show.” That thing has got to be older than a Guttenberg Bible.     We have also chosen a special place in our history for this date, so let's see how we get CallTouch. Now we know exactly why we are here and now.

There’s a well-known quarterback about to play for the National Championship that would find one rushing touchdown a sick joke. But before you start typing that hate mail about how Chad Henne is not Vince Young, you should know something. I’m talking about USC quarterback, Matt Leinart.

Leinart is third on the Trojans, with 6 rushing touchdowns, behind two guys named Reggie Bush and LenDale White. (I know, I haven’t heard of them either.) And while Leinart would never be mistaken for Michael Vick, he is only three TDs behind Vince Young (9 scores) on the season. (Although Young has 136 carries for 850 yards on the year, so don’t get too cocky, Matt.)

Now, I am not a journalist. (At least that’s what my editor tells me.) But they say when you are a journalist, you should admit your bias. So here goes: My two favorite college players to watch all-time are Michael Vick and Vince Young. Simply put, I yearn for the day when a tall, speed-demon quarterback will juke and jive for the end-zone wearing the Maize & Blue.

Imagine it, Wolverine fans. Michigan in an option offense with a mobile, versatile, hostile quarterback at the helm, shedding defenders as he laterals to Hart or Grady or Martin or lofts the ball deep to Breaston or Manningham, or Bass or Arrington or.... What could a defensive coordinator do against that? Pray. Oh, and ask his tubby lineman to run faster.

Unfortunately, it seems as though Carr and Terry Malone are the proud owners of a NASCAR they refuse to take out of the carpool lane.  It’s odd that Carr would recruit so many speed players, who don’t fit his plodding concept of a smash-mouth, Michigan offense.

Dear Lloyd: Your roster is a finesse offense…FINESSE!

Want more proof of how far behind the times U of M is? Okay, let’s take a conference historically known for mobile quarterbacks, and flashy, high-scoring offenses…like, oh, The Big Ten. (I’ll wait a minute so you can finish your seizure in peace.)

The truth is, of the ten opposing teams in the Big Ten, a conference not exactly forged in exciting, spread offenses, eight (8) of those teams had more rushing touchdowns by the quarterback than Michigan. And only Minnesota’s quarterback, with a big, fat zero had fewer.


For Ohio State fans reading this…and we do get a few…Troy Smith had 11 rushing touchdowns—more than Vince Young. Although to be fair, the entire OSU team and coaching staff has become much faster trying to outrun NCAA compliance officers during the last two off-seasons.

(By the way, why would a Buckeye want to support a site dedicated to removing Lloyd Carr, the only coach you guys have beat regularly? That’s just totally ignorant and stup—oh wait, I got it now, never mind OSU fans.)

Finally, I do not want this article to be misinterpreted as anti-Chad Henne. I am NOT on the “Blame Henne” bandwagon. With the one exception of the Notre Dame game, Henne played well for a sophomore. What I’m hoping is that Henne’s little demonstration at the Alamo Bowl opened Lloyd Carr’s eyes to that old sports maxim:

But you can recruit it at quarterback.

ANDREW J. MAURER (AKA Wolf Vereen) is a 2000 graduate of the University of Michigan and a professional writer, having trained at Second City (Detroit) in sketch comedy writing. He also wrote the short-lived comic book series, “Masters Of  The Ring” and is the author of two books currently in submission. He is represented by the Richard Henshaw Group of New York, NY.

IMPORTANT NOTE: If you have a thought/question/opinion on this article please email me at: cantbeattressel@canlloydcarr.com  Please keep comments brief and tasteful.  We’re all adults here, thank you.

LEGAL INFO: “From Where I Sit” is an exclusive column provided to admericaaaf.org only. Any use, posting, publication, copying or unauthorized link to this article without the expressed consent of the author is prohibited. Media inquires should be addressed here. Thank you for your consideration.